Our base camp for the weekend was at Jerusalem Creek Campground on (what would have been if the lake was full) the shore of Lake Eildon. Area #4 had been set aside for us for the weekend, and Peter, Roger and I took the opportunity to set up camp on the Friday afternoon. We managed a brief sit-around-the-campfire and early dinner before the rain started at about 7:00 pm and continued fairly enthusiastically for the next three hours or so before finally clearing. Needless to say, this did not auger well for some of the steeper tracks we would encounter the next day. Meanwhile, Colin and Heather wallowed in luxury in a cabin at the Taggerty Caravan Park. Three nights for the price of four - who can resist a bargain?

Phil and Gill arrived early to offer their services for the day, and we were joined by members of the other clubs listed above. Parks Victoria Ranger Neil arrived at 9:00 am to run through the usual safety briefing and to allocate our tasks for the day.

We had a couple of qualified arborists in the group and they were given the task of dropping some dead trees and hazardous branches threatening the camping areas. Phil and Gill stayed to assist them, and to do some clearing work and rubbish collection around the camping areas.

The rest of us were divided into two teams to drive some of the seasonally closed tracks, clear small trees, branches and bushes where necessary, report the nature and location of any hazards needing addressing by Parks staff, and ensure gates on the tracks were closed and locked. 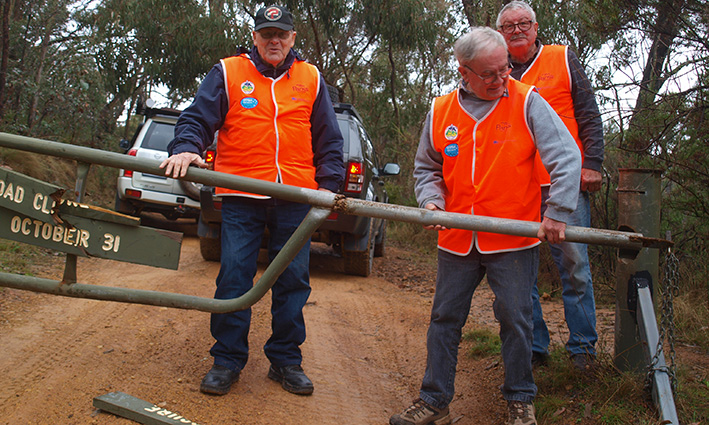 I think it goes here.

Returning to camp, we discovered a substantial pile of firewood, compliments of our arborists, which, with the assistance of an electric blower, soon became a substantial campfire. (The wood, not the arborists!) Come nightfall, the Offpeak team headed off to the Thornton pub to assess the suitability of the venue for our November Gathering pub meal. Thumbs up! Back at camp, Paul from the Peninsula club, and sole remaining volunteer, had the fire still roaring, so we sat around for some after-dinner tipple while we roasted each other and anyone else who came to mind.

The dawn broke, and some time later, the campers greeted it. But it had long gone. Colin and Heather rejoined us, as did Ranger Neil. Paul was the only one remaining from the other clubs and he took Peter under his wing as assistant and continued his tree cutting through the remaining camping areas. 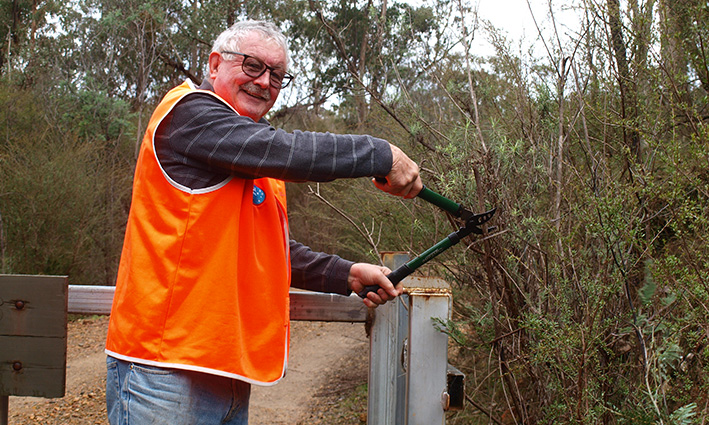 Not posed at all!

A number of additional volunteers from MJOC had planned on joining us on the Sunday, but there being insufficient work for them, they had been advised on Saturday afternoon that they wouldn’t be needed. [Guys, your offer of assistance is very much appreciated, and there will definitely be plenty of work arranged for next time.]

Meanwhile, back on Jerusalem Creek Track, the remaining Offpeak crew were dispatched to clear growth from obscuring roadside posts and signage, and attach reflectors to the posts that were missing them. This work continued until we ran out of reflectors about 5 pairs of posts from the end of the track. It was now early afternoon so we broke camp, said our farewells and headed for home. 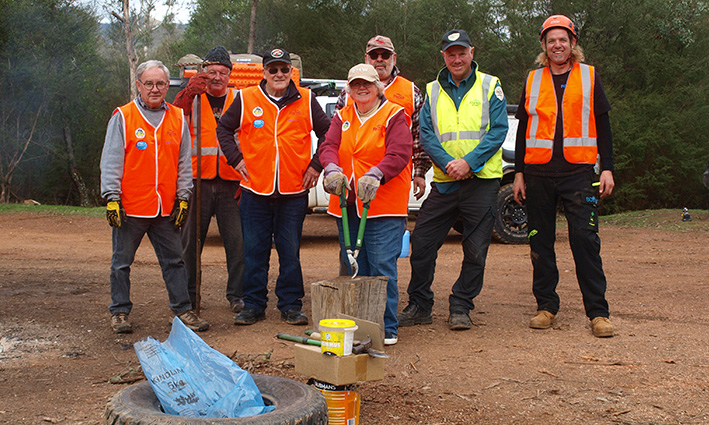 Pete holding up the rake (or the other way round?) The rest looking spiffy.