The purpose of this trip was to visit the western fringes of the recent Gippsland bushfires, and lend a hand to the local economy by supporting local businesses where possible, giving credit cards a workout or adding to the local moth population.

We base-camped for the duration at the Lake Tyers Beach Camp & Caravan Park, and day-tripped each day into the surrounding areas. Here are the reports from each day's travels...

At 10:30 am, after a most professional trip briefing by our trip leader, the convoy began the process of leaving the camp ground one at a time behind the closed barrier. Heading towards Orbost, we turned left and right many times along many roads. We detoured around a tree on the track only to come across a second large log requiring Colin’s chainsaw to break it sufficiently for Pete to attach a strap to the larger part and drag it off the road. Colin and Wayne completed the final push required to make it safe to pass. As we were completing the task, two motorbike riders passed the convoy on the left and would have hit the log at the speed they were travelling if we hadn’t moved it out of the way. It was a job well done! 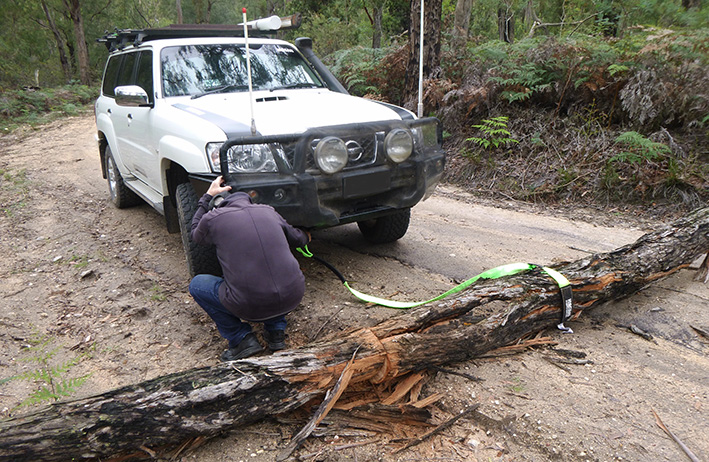 We travelled on to Cossicks Weir. We walked down to inspect the weir which had just a trickle of water flowing over the top. There were a few puddles lower down stream. 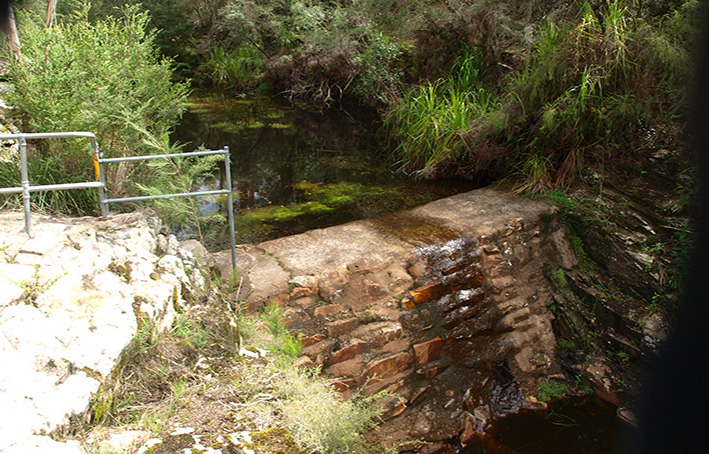 We continued on to the Stoney Creek Trestle Bridge and then towards Nowa Nowa and the Mingling Waters Caravan Park and Cafe for lunch.

After purchasing newspapers from the General Store, we headed off towards the Burnt Trestle Bridge. Taking many roads we arrived at Pettmans Beach Campground and walked to the beach. After many more left and right turns along many more roads, we arrived back at camp at Lake Tyers Beach at 4:00 pm.

The morning was sunny and cool as we left camp at 9:38 am and drove to Lakes Entrance where we stopped to stock up on toilet paper - one pack per customer at (insert name of global German supermarket chain here).

After stopping to view and photograph the view over Lakes Entrance and the Gippsland Lakes, we drove to Eagle Point via Bairnsdale. During the drive, Colin kept us informed of many interesting facts about the area.

We viewed the silt jetties and waterways from a lookout and drove along a silt jetty to the end where we had a wander around. Very Serene! 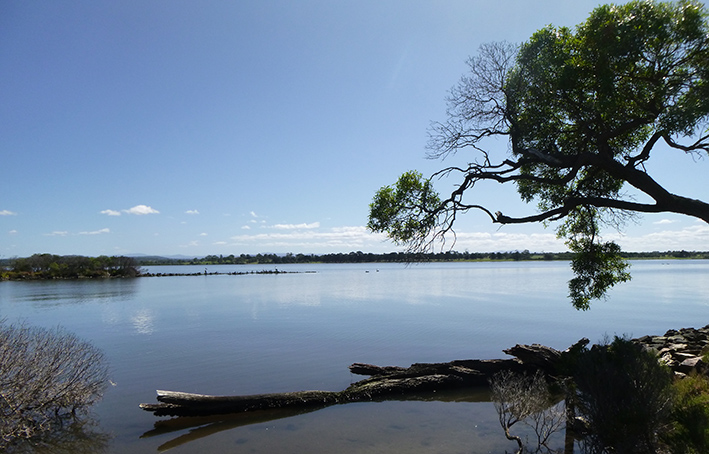 We lunched at the Paynesville bakery before crossing on the ferry to Raymond Island and wandering through the Koala Sanctuary where several sleepy koalas were spotted. We then drove around the northern part of the island along Gravelly Point Road. Much of this part of the island is covered in natural bush. 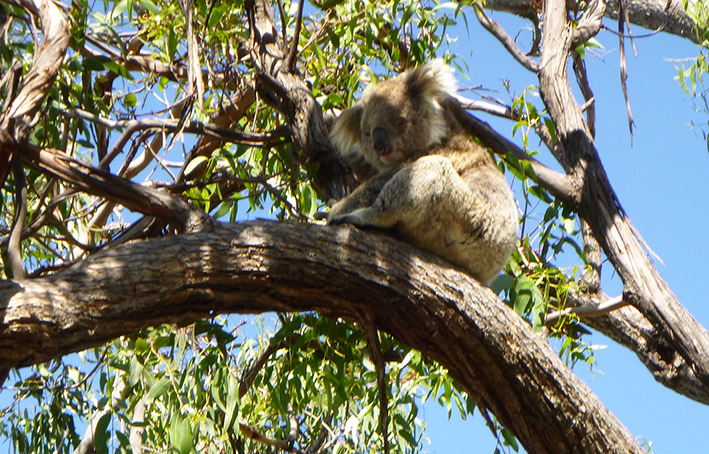 We then took the ferry back to Paynesville and headed back to camp.

We departed camp at 10:00 am on another sunny but cool morning and arrived in Lakes Entrance in plenty of time to find parking spots before heading over to the Peel’s Cruises office to pay our fares for today’s cruise. While waiting to board the boat, Stormbird, we “assisted the Police with their enquiries” as they searched the wharf and docked boats for a person of interest. By 11:00 am we were aboard, along with another tour group, and we set out along the Cunningham Arm. We passed several places of interest and saw many waterbirds including pelicans, black swans, cormorants and spoonbills.

Around noon we docked at Metung and enjoyed a 2-course lunch at the Metung Hotel as part of our cruise. The view from the dining room was pleasant and after lunch there was a little time for exploring on foot. 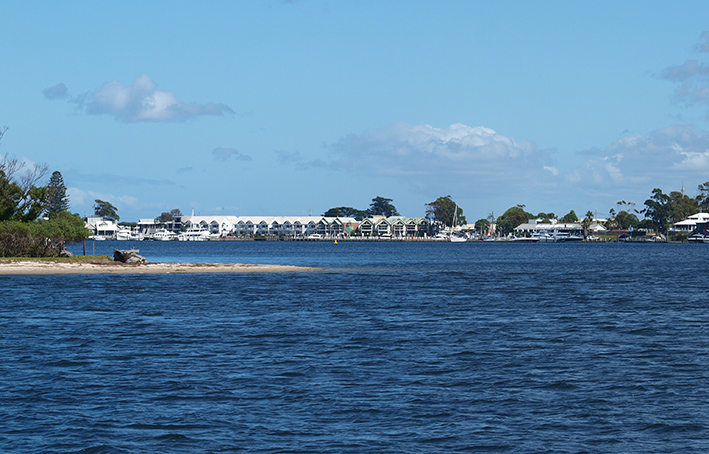 Back on the boat by 1:45 pm we made our way back to Lakes Entrance via a slightly different route. We explored Box’s Creek and had a good look at the Entrance without actually going through it. There were seals playing in the water and sunbathing on the rocks at the Entrance. 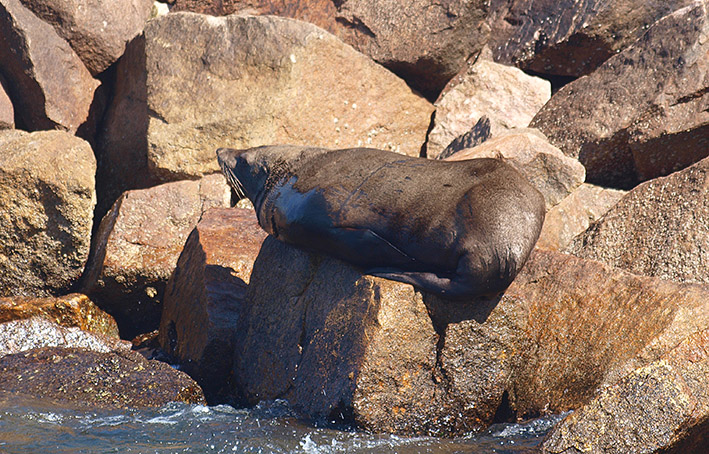 The trip ended when we docked, and some time was spent exploring and shopping in Lakes Entrance before returning to camp to welcome Graham who had arrived in our absence.

St. Patrick’s Day and the Luck of the Irish Tour.

We left camp at 9 am heading towards Orbost for a lovely morning tea. On the way we turned into Old Colquhoun Road and stopped at the Stoney Creek trestle bridge that saw the last train cross it in 1988. 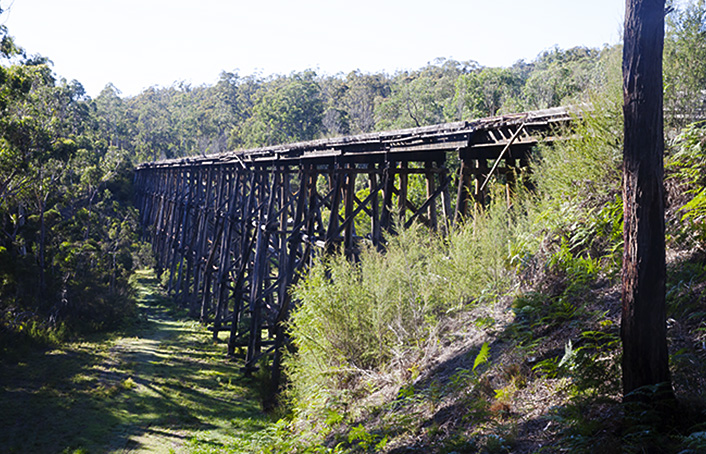 It being St. Patrick’s Day, Wayne and I saw something you don’t see in Ireland - two Black snakes sunning themselves. One was 1.5m and the other over 2m in length.

Back to the highway, we turned left towards Wairewa and saw another trestle bridge, but this one was only half there as the other half had been burned down in the last bushfires - a very sad sight.

We then headed east along the highway, turned on to the Cape Conran Road and stopped at East Cape Beach. This area was devastated by the fires that only stopped burning when they reached the ocean. Then we moved on to a lovely spot, West Cape Beach, where quite a few fishing boats had gone out to catch their evening meal. 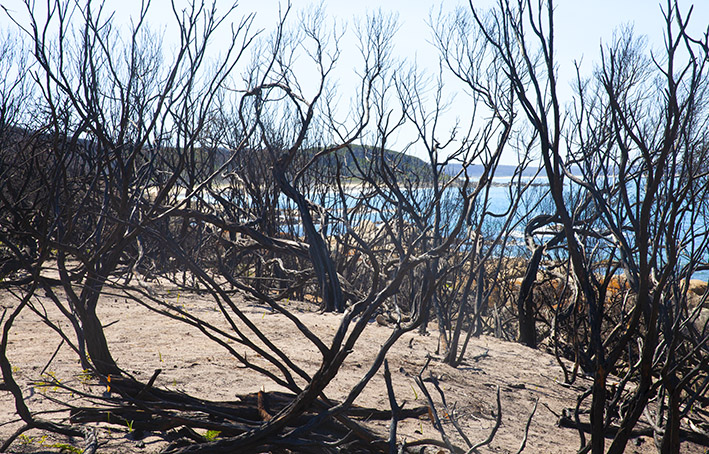 As we had no rods, we all went to the Marlo Hotel for a spectacular lunch. This was followed by a little sight-seeing where we tried to find the mouth of the Snowy River, but to no avail, and returned to camp along the Princes Highway.

Thank you to Heather and Colin for organising the trip, and to all participants for making the day so pleasant.

We left camp a little after 9 am heading for Lakes Entrance to pick up Uwe (who had gone ahead earlier in order to do yet more shopping at that aforementioned German place - unsuccessfully it turned out as they didn’t open until 9:30).

We headed towards Bairnsdale, crossed the Nicholson River and turned towards Sarsfield where we saw the evidence of the bushfires. Mother Nature is slowly taking over the devastation and there is quite a lot of regeneration among the flora. We stopped at Bruthen for fuel, ablutions and morning tea.

Leaving Bruthen for Omeo, we travelled along the Great Alpine Road. The countryside was beautiful despite evidence of the bushfires. Connor’s Hill Lookout provided an opportunity to view the view and take photos.

Back on the road, we checked out the new ablutions block at the Swifts Creek caravan park. Very nice! (At least on the outside - it was locked tight.) Continuing on, we crossed the lowest high point (??) of the Great Dividing Range and arrived in Omeo at 12:25 for lunch and a short tour.

Leaving Omeo we travelled the Bairnsdale, Tongio Gap, Great Alpine and Bindi Roads into the Tambo Valley. We then drove up into the Nunniong Forest, and to the Washington Winch. We stopped to have a look and take some photos, then continued onto the Bentley Plains Road to Moscow Villa for more looks and more photos, and on to the Bentley Plains Hut. Yet more looks and photos. 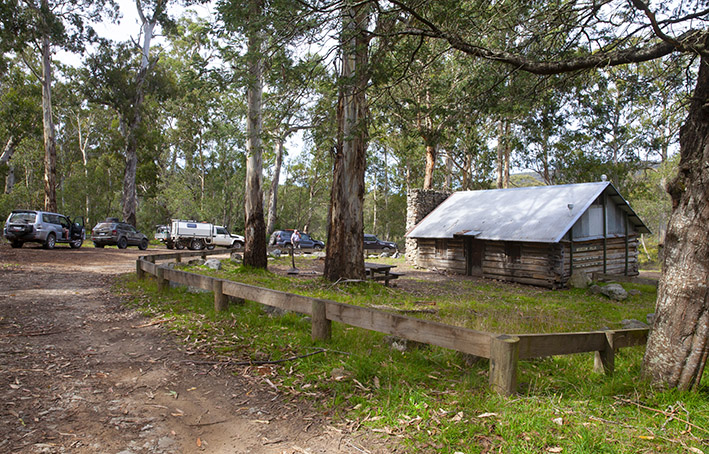 [Here our reporter seems to have dozed off, as next thing we know…]

Today dawned another gorgeous day and started with a tagalong tour of the Lake Tyers Beach township. First a 200m commute to the pub to establish whether one of our group would need to order the courtesy bus to transport him to dinner there tonight. The rest of us will be walking. Next to the boat ramp into the lake (boats, not us), then through the back streets to the main road. Lots of properties for sale.

We then followed the A1, C620 and C608 to Buchan where we arrived a little after 10 - too early for lunch so we had morning tea.

Heading out of town, we followed some gravel tracks that took us to One Tree Lookout. The route took us through several severely burnt sections of forest and farmland. From the lookout we had a 360º view and as far as the eye could see, in every direction, everything was burnt. 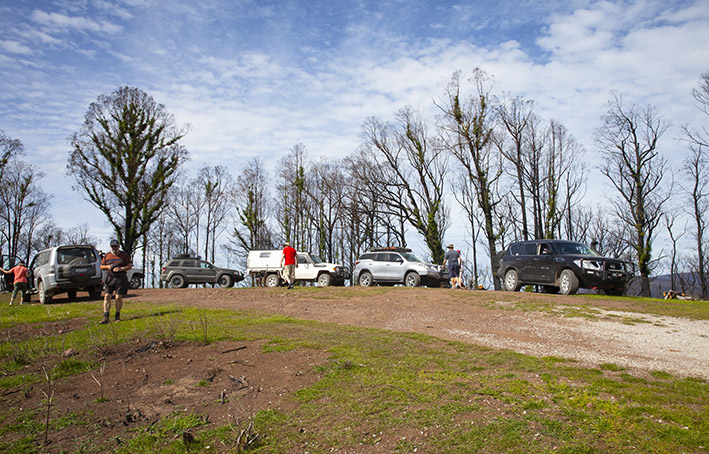 The rains that followed the fires seem to have accelerated the regrowth of trees and pastures, but in the forest areas ground cover is still sparse and erosion of the topsoil into creeks and rivers is evident and substantial.

Moving on, we arrived at Balley Hooley Campground at the confluence of the Buchan and Snowey Rivers. As with all other waterways we have seen, these rivers were brown with the silt and ash washed from the soils left barren after the fires.

Backtracking, we returned to Buchan for lunch. After lunch, we back-backtracked (tracked?) our route out of Buchan then headed through more burnt-out forest along Bete Bolong Road and Simpsons Creek Road to the Princes Hwy. and back to camp. 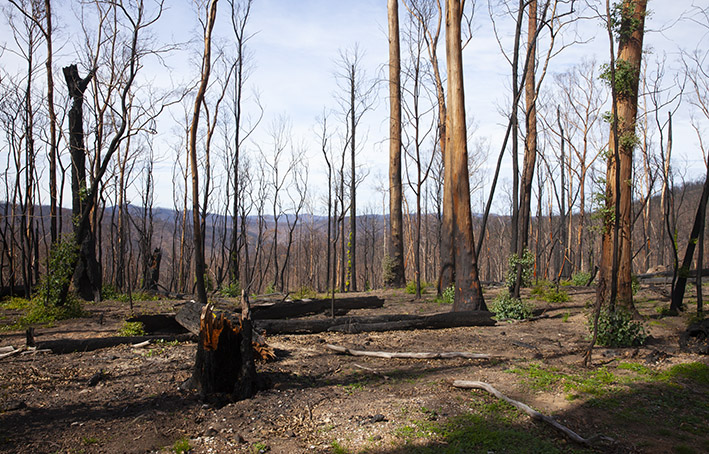 It was eye-opening to see the severity of the burning including buildings, fences, tourist facilities, etc., but encouraging to see the level of re-growth, though it was suggested that the fastest and strongest ground cover recovery seemed to be weed species. But in the absence of Heather’s plant book, we couldn’t be certain.

A fascinating drive, I thought.

After overnight rain, it was time to pack up and head for home. Except, that is, for our fearless leaders who remained in Lake Tyers Beach for a couple more days of well-earned R & R. Thanks Heather and Colin for a wonderful week.