Journey to the Centre of Victoria - July 2022 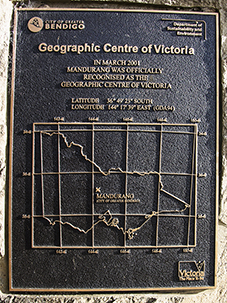 Six cars made their way to Romsey for the start of this trip. Most of us left home in the rain, as after all the ‘rainmaker’ was present on the trip. Our meeting point was at the bakery. Happily, the sun came out soon after and with everyone being fed and watered we got underway.

First stop was 200m at the end of the street for a nature break.

A few kilometres out of town, after turning on to Musteys Bridge Road, we stopped at Burke and Wills Camp #4 site of the 23rd Aug 1860. It took B & W four days to get to here. Luckily we managed the journey in a few hours.

The next stop was at the site of Australia’s first powered flight in 1910, on a plane made in Australia. We then walked 100m further up the road to look at the memorial erected on the 75th anniversary of the crash of the TOKANA VHUYY, which took the lives of 10 passengers.

Still following the B & W track, we passed Camp #5 situated in the grounds of Granite Hills Vineyard. We don’t think they had time to establish the Burke & Wills Winery on the way through, but it is there today.

Heathcote was our next port of call, where we had a nice lunch at the bakery.

After wandering along lanes, roads and dirt tracks, we arrived at the Mia Mia sports ground, site of Burke & Wills Camp #6 on the 26-27 August 1860.

Next point of interest was the Redesdale Bridge on the Campaspe River and our Trip Leader told us the story of this iron bridge. The trusses were imported from the UK in 1859, and intended for a crossing of the Yarra at Hawthorn but the ship they were on caught fire and sank off Williamstown. Ten years later the trusses were salvaged and erected on the present site. We then had a short drive and walked to check the original ford across the river. 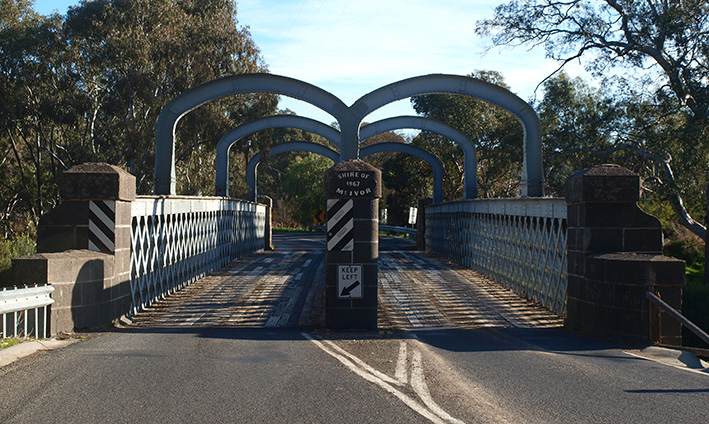 Following more road, lanes and dirt tracks, we arrived at the last point of interest for the day - the Geographical Centre of Victoria on Holliday Road, near a chapel in Mandurang. A mandatory group photo was taken here, and afternoon tea partaken. This became the end of the trip and luckily the rain only caught up with us again on our trip home.

Romsey to Mandurang was a 146km trip exploring and driving through some lovely countryside in the sunshine. Many thanks from us all to our trip leaders for organizing such a very pleasant and relaxed day, enjoying an area rarely visited.