The group assembled at the Port Augusta G’Day Caravan Park and left around 9:00 to travel to Mount Ive Station via Iron Knob. Not long after leaving Port Augusta some rain periods were encountered. We hoped that the rain would not cause problems with track conditions. We turned off the Eyre Highway at Iron Knob onto the dirt road towards Mount Ive. We were pleasantly surprised to find that the road had been freshly graded and we had no need to air down as the road was smooth and had not been adversely affected by the rain. We stopped prior to reaching Mt Ive to gather some fire wood, dodging some rain showers and winds in the process. We stopped to inspect the submarine positioned into the ground at the entrance which is quite an eye catcher. 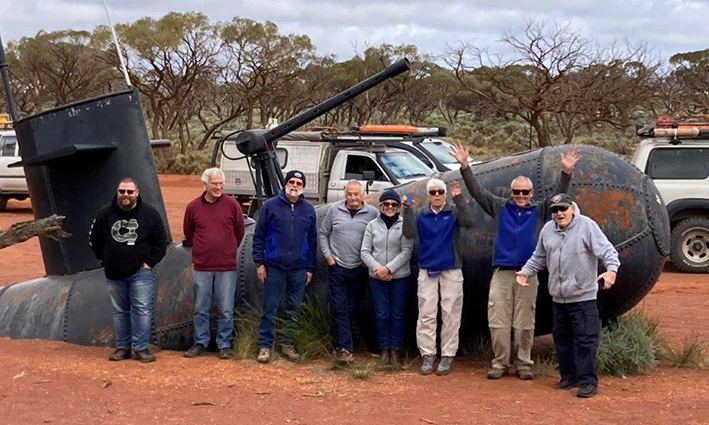 We then travelled the relatively short distance into Mount Ive Station to book in for our 3-night stay. (Problems with internet connectivity caused some delay with this activity.) The station staff told us that they were hosting the Variety Bash on Thursday night and they were expecting around 400 people to arrive! Thankfully that was the day that we were leaving. After lunch and setting up camp we headed off on a 19km tour on the Horse Shoe Loop track. This track offered some good scenery and challenging 4WD sections. 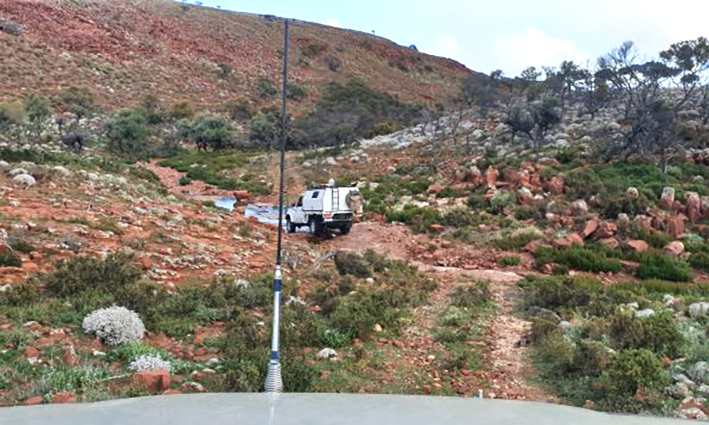 We arrived back at camp to some strong winds and rain showers. We made use of the large camp kitchen (normally only available to guests staying in the accommodation units, but made available to us for this stay) to shelter from the weather and make our meals. The weather moderated through the evening allowing for a comfortable night’s sleep.

We awoke to a misty morning which lifted by about 8:30 and the day turned out to be very pleasant. The trip for the day was a round trip of around 250km through the Gawler Ranges. Places visited along the way were Paney (shearing shed), Kolay Hut, Kolay Mirica Falls (lunch spot), Old Paney (homestead), Policeman’s Point, Stone Dam and the Organ Pipes. 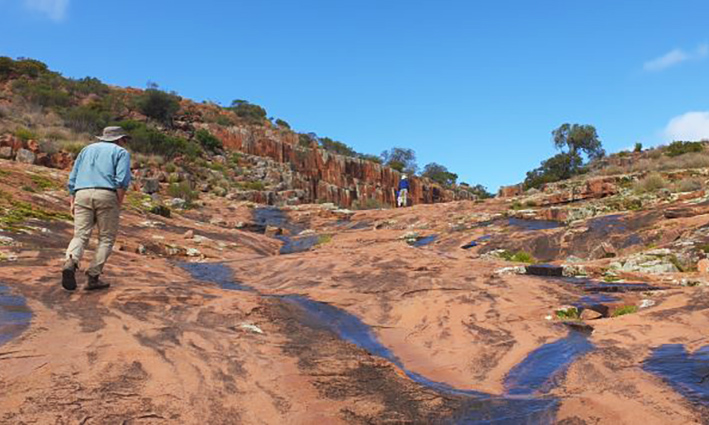 The tracks were mostly in good condition but there were some slippery and muddy spots. The evening back at camp was calm and a camp fire was set up which we all enjoyed before retiring to bed.

The day was sunny but windy. After breakfast we went to Lake Gairdner which was full with water and looked stunningly beautiful. 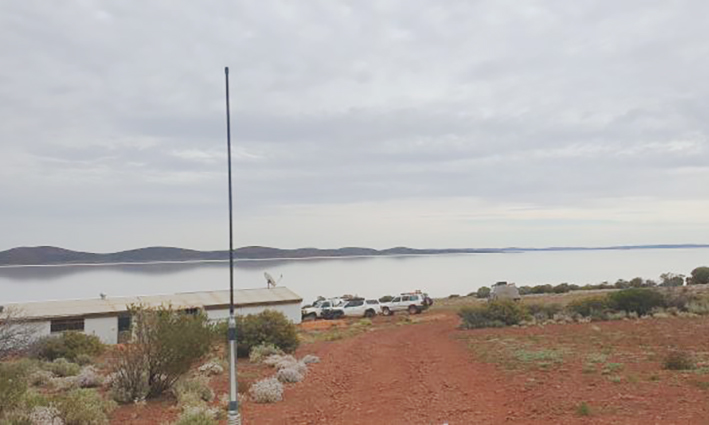 Many photographs were taken and some of us walked various sections of the shore line. The lake is used for straight-line speed testing of cars and motor bikes (Speed Week) during March when it is a dry salt lake.

We used the speed week canteen building as shelter from the wind and had our morning tea. We stopped at another organ pipe rock formation on the way back to Mt Ive Station. After lunch at Mt Ive Station we took the short track up to Mt Ive summit. This track had some steep and rocky sections. The view from the summit was impressive but the wind was very, very strong. 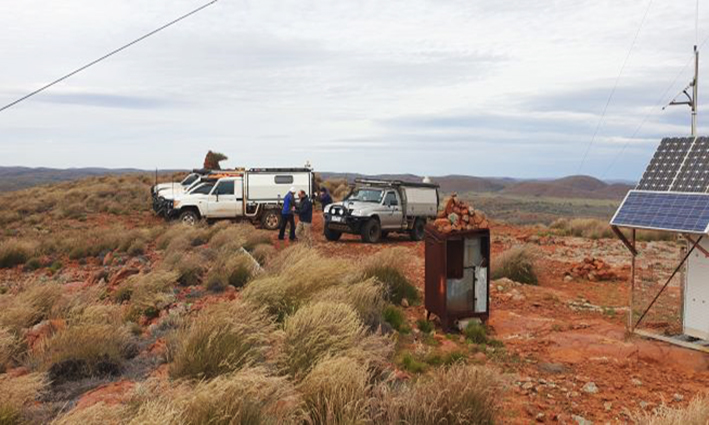 We returned to camp for afternoon tea and relaxed in the camp kitchen common room before dinner.

We left camp around 9:00 and headed towards Kingoonya. First stop was Waltumba Tank. 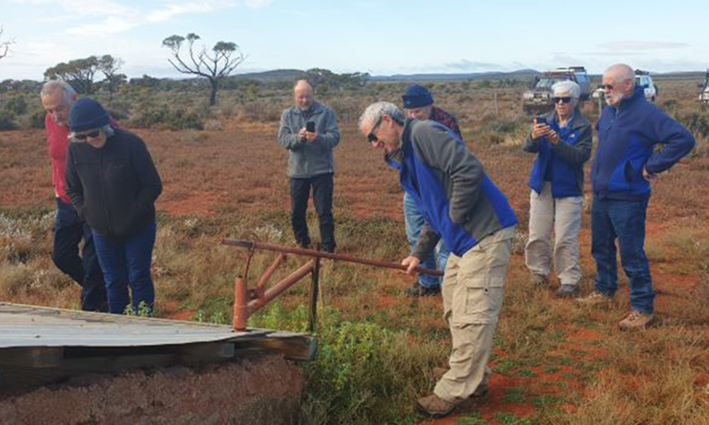 After pumping furiously on the handle we took a short side trip into Lake Gairdner on a track where Roger unfortunately staked the side wall on his front passenger tyre. After fitting a spare we all continued to the lake. The lake was a magnificent sight with blue sky and white salt shores. After enjoying the lake vistas we moved on again towards Kingoonya. Lunch was had at Skull Camp Tanks. After lunch the weather deteriorated with increasing wind and showers. We arrived at Kingoonya Caravan Park in the early afternoon, set up camp and made for the Kingoonya Pub (adjacent to the caravan park) to shelter from the wind and rain. 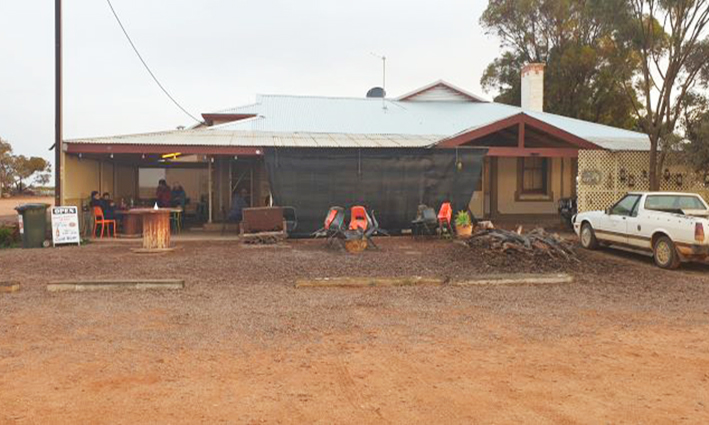 Dinner was had at Kingoonya Pub. The weather eased while we were at the pub and we returned to camp under clear skies.

We awoke to a fine morning. Following breakfast we headed off towards Tarcoola following the east-west section of the Indian Pacific railway. After passing through Tarcoola we turned into Goog’s Track, aired down and fitted sand flags. After travelling over a corrugated section we entered the Goog's Track Reserve and changed to the Goog's Track nominated UHF channel 18. The sand hills were fairly firm from the recent rains but were at times chopped up, particularly on the southern sides. As we were travelling north to south this was not too much of an issue. We arrived at our overnight camp at mount Finke around 1pm. 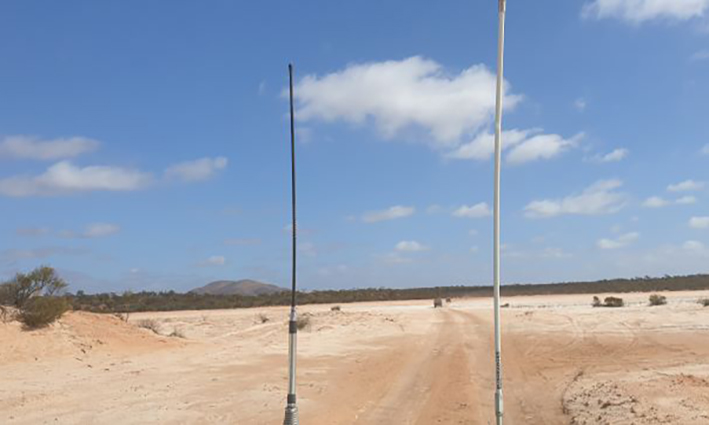 We had lunch and set up camp. Two of the party (Paul and Colin) scaled the eastern face of Mt Finke and were rewarded with grand views of the surrounding area.

We set up a camp fire and exchanged a few yarns and jokes before retiring for the night.

We set off to Goog's Lake traversing the sand hills. There were a number of trees overhanging the track that caused damage to some of our sand flags. 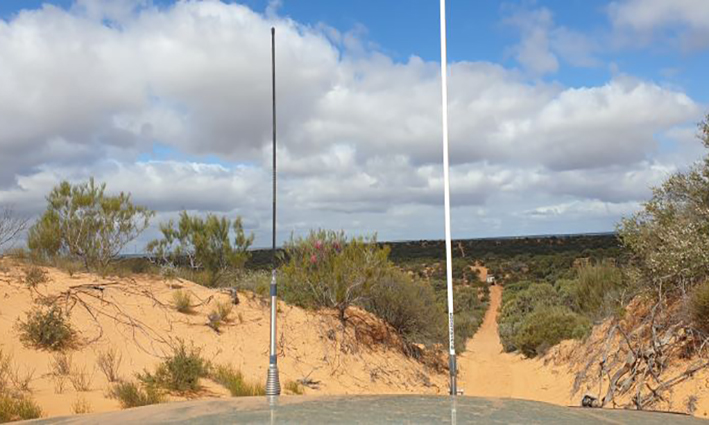 Many of the sand hills were chopped up on the south side (the downhill side for us) causing a lot of pitch and roll to our vehicles. We stopped at the Googs Memorial and read the information about the history of “Goog” Denton and the track. 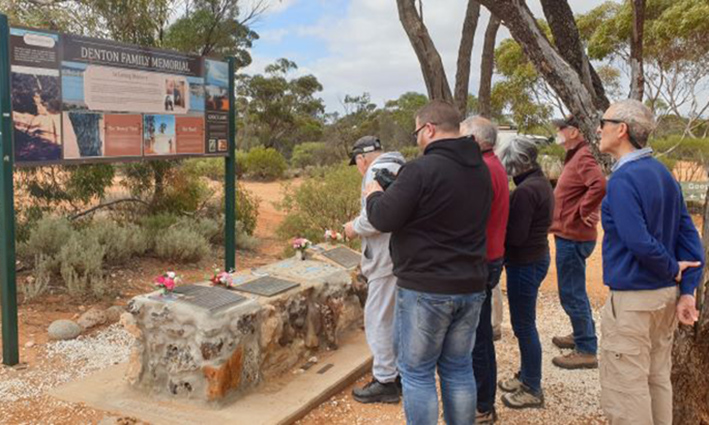 We then continued to Goog's Lake where we had lunch and set up camp. Some of the group walked around/on the lake and we had general relaxation time.

A camp fire was made and we had dinner around the camp fire.

We headed off around 9:00 and completed the Goog's Track around 11:30. We pulled off the track to air up and while doing this, were visited by a couple of S.A. Parks rangers who were heading north to Goog's Track. The rangers checked that we had paid the required camping fees etc. and we all completed a survey. After airing up we continued to the Eyre Highway intersection where we had a group photo at the Goog's Track sign and information bay. 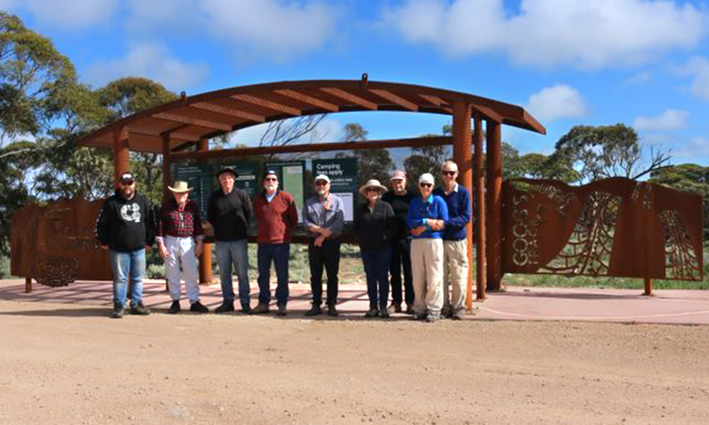 We then headed to Ceduna stopping at the fruit quarantine station on the way where Uwe negotiated free passage for us all. We arrived at the Shelly Beach caravan park shortly after mid-day where we had lunch and set up camp.

The afternoon was spent relaxing and making use of the shower and washing facilities. We all went to dinner at the Ceduna Foreshore Pub and then back to the park to retire for the night.

We awoke to a sunny morning. After breakfast we went to Denial Bay where we saw a small pod of dolphins from the jetty. We had morning tea and then went to Mackenzie ruins for a bit of a walk around. We then headed back to Ceduna for shopping and lunch before heading back to Shelly Beach Caravan Park. The weather turned poor after lunch. The group had dinner in the camp kitchen area and the wood heater/stove was fired up to help keep us all warm.

The poor weather continued overnight, including some hail but cleared in the morning. After breakfast Phil & Gill and Paul departed to go their own ways home. The rest of us headed off towards Coffin Bay. After visiting Smoky Bay we stopped at Streaky Bay for morning tea. We then continued to Coffin Bay Yangie Bay camp ground. Dinner was at the Coffin Bay Pub where we celebrated Roger's Birthday with his grandniece (who works at the Pub) and her partner attending as well. After an enjoyable dinner we headed back to camp in the dark.

The morning was fine after some rainfall overnight. Following breakfast we set off to Seven Mile Beach. The track had some sand hills, rock sections and there were areas with a lot of water over the track. 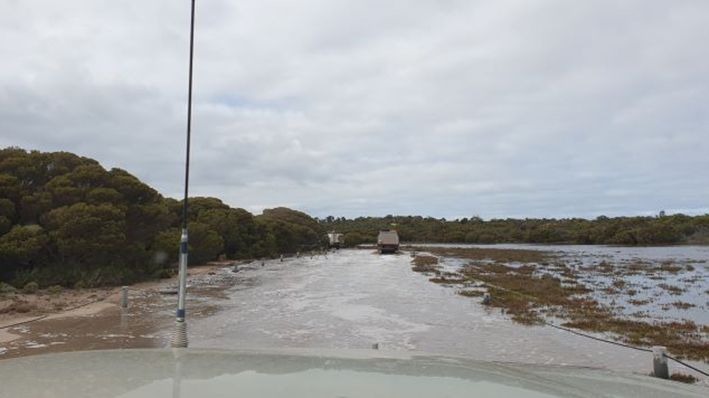 We encountered a party coming the other way and they indicated that the water over the road was not exceptionally deep so we continued on. Some of the flooded sections were very long and it was at times like driving through a shallow lake. We made it to Seven Mile Beach without incident and we stopped there for morning tea.

We decided not to travel up the beach as the tide was coming in, the sand was relatively soft and the beach had a lot of seaweed on it making it potentially difficult to drive above the high water line. After morning tea we headed back to the Black Springs Campground where we had lunch and set up camp.

The afternoon was spent relaxing and walking around the area taking in the natural beauty of the area. A camp fire was set up and was the focal point until we retired for the night.

After breakfast we headed into Port Lincoln where we stopped at the Coles Carpark and sought out morning tea at a Bakery/Cafe depending on our individual wants. From there we headed to the Lincoln National Park and headed into Fisherman Point campground for lunch. After lunch we took a short drive to the Cape Donnington Lighthouse, September Beach and Richardson’s Shack (or where the shack once was), then back to camp for afternoon tea. The rest of the afternoon was R&R, walks along the shorelines, etc.

After breakfast Jeff and Roger departed to head back home. The remainder of the group, Uwe, Colin, Danny & Fay, headed off for a trip down the Memory Cove road then turned off to a beach near Cape Tournefort. The final section to the beach was via a significant sand hill. The sand hill had soft sand so we aired down some more before tackling it. We all managed to get over the sand hill and down to the beach. The beach was quite picturesque with white sand and rugged rock outcrops.

After exploring a possible track heading up to the cliffs, and deciding it may be a bit too difficult for us, we headed back up the sand hill. This proved more problematic than we expected as some of the sand was steep and very soft. With a little less tyre pressure and the assistance of some Max Trax for some, we all made it up over the sand hill. 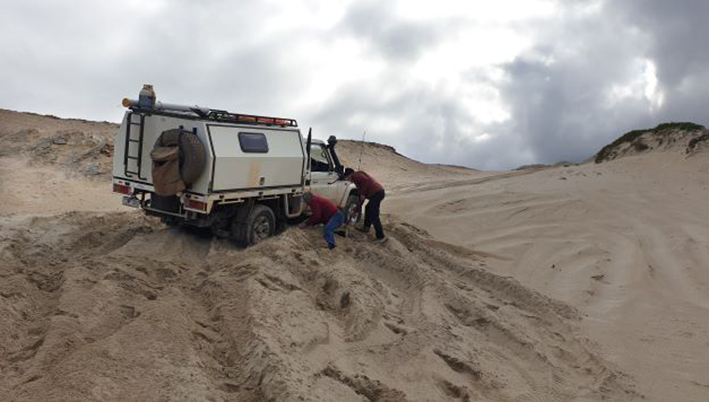 We next headed to Wanna Beach and then back to camp for lunch. The afternoon was spent enjoying the fine weather and surrounding shoreline. This was the final day of the trip and we all headed our own way home the next morning.