The plan was to travel from Mansfield to Corryong through the Victorian High Country. After meeting at Mansfield on a fine Sunday afternoon we enjoyed a meal at the local pub.  During the night it rained – a sign of things to come. We set out next morning making our way to the Howqua Road. We hadn’t gone far when the lead vehicle developed a loud noise so a halt was called while a stone was removed from the brakes. 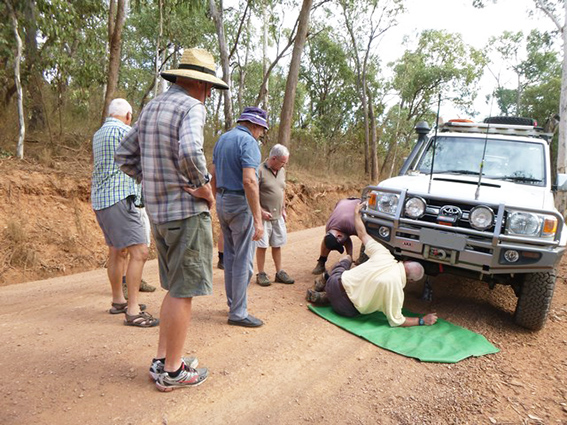 We passed many caravans heading out of Sheepyard Flat but there were still many campers in residence. We continued on and enjoyed morning tea at Fry’s Hut on the Howqua River. We then took Brocks Road, Bluff Link Road and Bluff Track until we reached Bluff Hut. We took photos of the views, had lunch then moved on leaving quite a crowd who were planning to stay the night. Our destination was Lovick’s Hut. It was already fully occupied by the time we arrived but we set up camp and got a good fire going. Around 7:30 p.m. we had to abandon the fire as rain settled in with thunder and lightning in the distance. It rained all night. 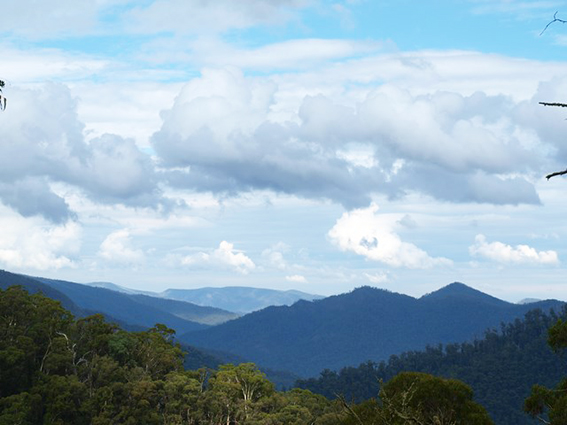 The view from Bluff Hut

Next morning we awoke to cloudy skies but it wasn’t raining as we packed our tents. Bluff Track beyond Lovick’s Hut was not in good condition and we bounced up and down over slippery rocks. One corner was particularly rough but we all made it around with a little help from our friends. In the first hour we covered 2.6 Kms. We climbed into the clouds but after a while they lifted and we could at least see the scenery. We passed several interesting scree slopes near Howitt Plains. 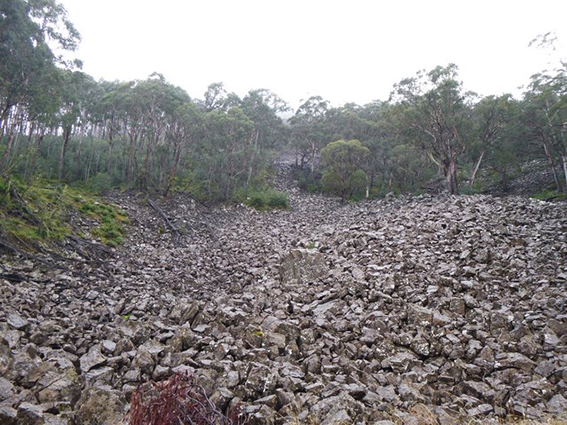 We turned on to Zeka Spur Track and headed for the Wonnangatta Valley. The road was wet and slippery. We came to a very wide and muddy corner (hereafter known as Keith’s Corner). Four vehicles made it around with difficulty, then Keith and Monica ended up precariously perched near the edge.

A recovery effort was made. First Paul’s vehicle was attached to a tree to prevent it moving while he used his winch to anchor the back of the vehicle straight. At the same time Graham used a gentle tow with a strap to straighten the front of the vehicle. The manoeuvre was successful and all the vehicles made it safely down into the Wonnangatta Valley. 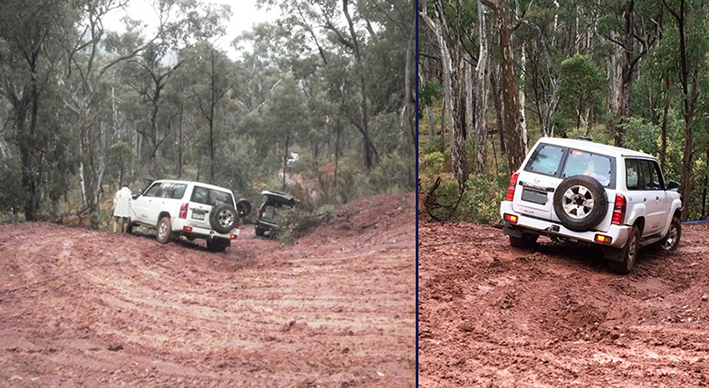 We set up camp beside the Wonnangatta River. We didn’t have to wait all that long for the rain to arrive, though we did make it through Happy Hour first. The rain put a dampener on plans to celebrate Paul’s birthday though a few hardy folk with umbrellas did share a glass of wine with him. 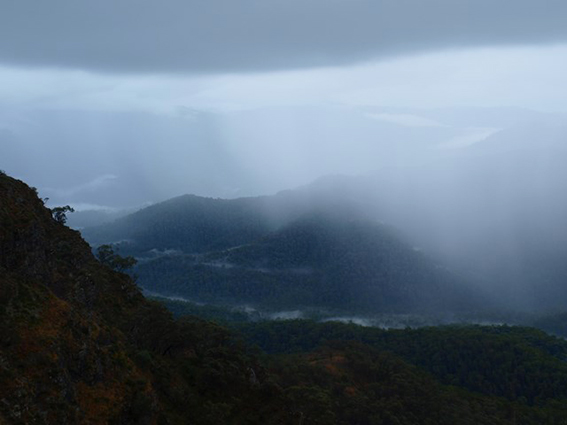 Clouds in the valleys

In spite of the wet conditions we decided to try to make it to Talbotville via the Wombat Range Track and the Cynthia Range Track. Much of the time we were driving through clouds or fog so thick that we couldn’t see the lights on the vehicle if front. We made it through without any problems and then drove up the Collingwood Spur Track. We had some great views from the helipad then drove to Grant Historic Area for lunch. Our next stop was Dargo where some got fuel, some got coffee and some visited the recycling centre to dispose of our rubbish. Our camp that night was at Italian Flat beside the Dargo River. We enjoyed happy hour under Paul & Tineke’s awning as the rain set in once again. 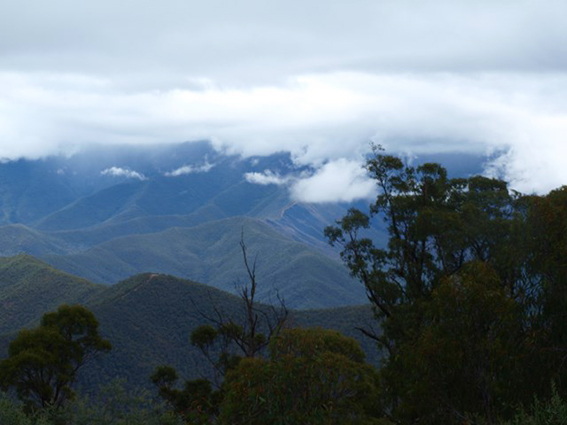 The view from Collingwood Spur

After another night of rain Geoff decided that having a leaking tent was too much, so he headed for home. The rest of us travelled north to the Dog’s Grave. We inspected the monuments, then made use of the newly built hut to have morning tea out of the rain. We continued to the Dinner Plain Track through some tall timber then turned onto Victoria River Track. We paused at the Black Sallee camp site. 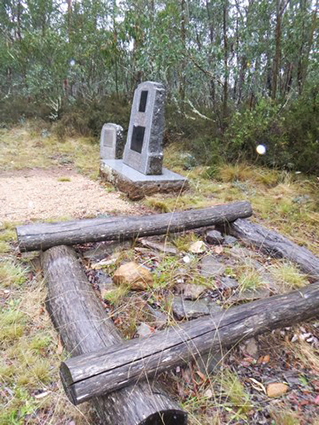 We travelled on through Cobungra Station, the largest cattle station in Victoria and crossed the Victoria River. We reached the Great Alpine Road and after airing up we headed to Omeo for lunch at the bakery. Our camp for the night was at Swifts Creek. There was a breeze and some sunshine so our tents dried out.  We walked to the nearby pub for dinner. As it had been planned for three vehicles to leave the trip at this stage and with more rain forecast the Trip Leader decided to end the trip at this point so next morning the group dispersed. A couple of vehicles continued on to Corryong but not on the back tracks. 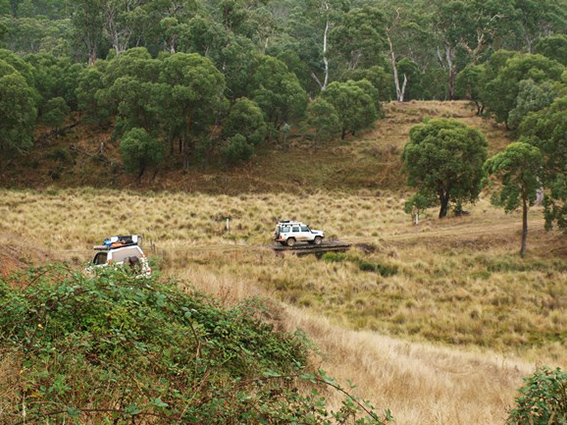 We all agreed that we enjoyed our adventures in spite of the rain and thanked Uwe for leading us.