We met at Gisborne on a fine morning for our drive in the Wombat forest.

This was a trial for the newly developed FWDV touring route for the Wombat Forest. Though it is a 4WD touring route, it was mainly all wheel drive roads. In fact there was only one short hill on Distillery Track where we used low range – and this could have been negotiated in high range if necessary. It should also be noted that the area is dry and the state of the roads would deteriorate considerably in the wet. 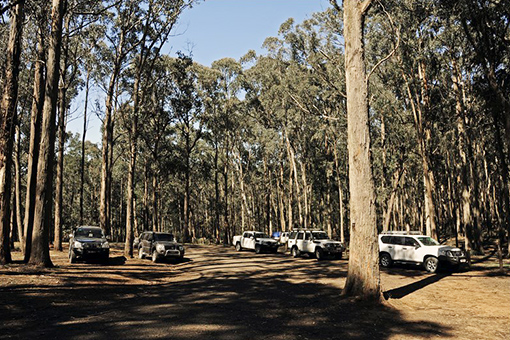 Wombat Forest looks to be a well managed area from a timber producing forest point of view. One can see where trees have been harvested and new ones allowed to grow to maturity. This is evidenced by a lack of undergrowth in many areas and tends to give the appearance of a mono-culture. There are not many old growth (more than 100 years old) areas. However, we saw no sign of any commercial timber production on our trip. Is timber still being harvested there at all? Being a smaller forest, there are many short tracks on this 100km route, so there are many turns. Rather than bore you and tell you where we turned, I suggest you refer to the FWDV map/guide of the route. We visited the main points of interest mentioned in the guide namely…

Firth Park – This is a large camping area overlooking a man-made water hole. It was developed by a Mr Firth who was a retired gardener from Mt. Macedon. It has an area of exotic trees planted by him. We arrived at morning tea time – self serve only! 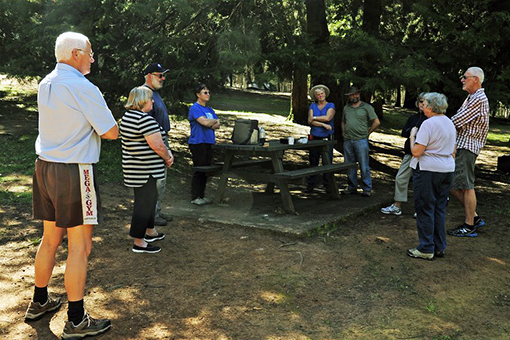 At Firth Park for morning tea

Yankee Mine – is an abandoned mine site where mine buildings, a weir and other related foundations can be found in amongst the blackberries and other scrub as well as a caved-in shaft. 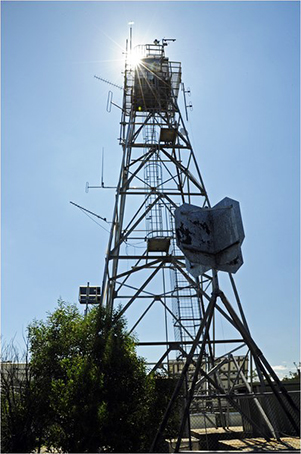 Blue Mountain Tower  - is a fire tower and so has extensive views. Our lunch spot. Just down the mountain is a set from the TV series Man From Snowy River. This is on Private land and can only be viewed from the road. 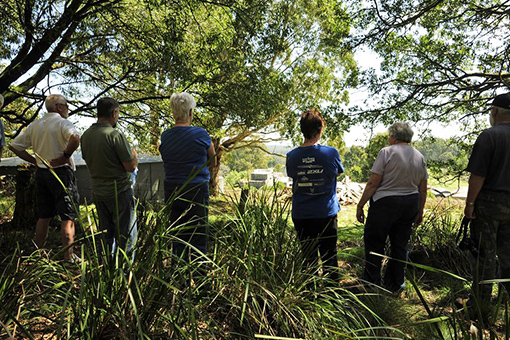 Rat Hole Mine – is another old mine. It is more recently abandoned with no relics – only a shaft. Note – I don’t think I would like to work at a mine called Rat Hole! Did rodents have something to do with its demise?

Mt. Hope – is the highest point in the forest, although you wouldn’t know it as there are no views from the summit because of high trees. 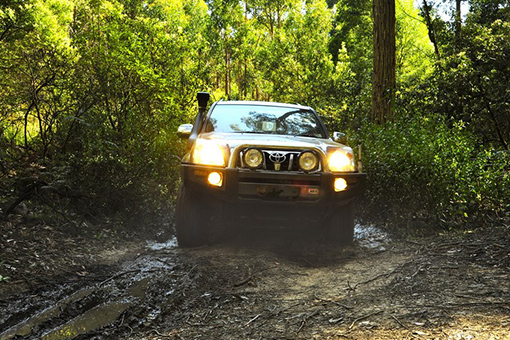 Ruthi emerging from a mud puddle

Overall it was a fine day for a pleasant drive in the bush with good company. The easy to follow route took us to some great spots and is well worth doing. Thanks to Colin & Heather for leading us on a thoroughly enjoyable trip.