The Wombat State Forest is located west of Melbourne, Victoria, Australia, between Woodend and Daylesford, at the Great Dividing Range. The forest is approximately 70,000 hectares in size and sits upon Ordovician or Cenozoic sediments.  The Bullarook Wombat State Forest was proclaimed in 1871 and is currently closed to logging.

The Lerderderg State Park abuts the southern border of the Wombat State Forest and incorporates the former Pyrete State Forest. The total size is 14,250-hectares located between Bacchus Marsh and Blackwood. The park bears the same name as the Lerderderg River which has cut the 300 metre deep Lerderderg Gorge through sandstone and slate, almost bisecting the park.  The park and gorge are named for the river whose name is possibly of aboriginal origin. If anyone can shed light, let us know. 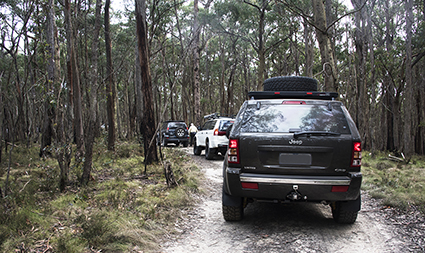 Heading into the forest

We all gathered opposite the Jolly Miller café in Gisborne for the trip briefing on a perfect day for exploring the forest that was once home to a thriving timber industry.  After the trip briefing we departed at 09:00 with the instructions for a radio channel selection and alternatives, a radio check and to turn left at the supermarket in assigned order and proceed to the forest.  Unfortunately a number of us did not know where the mystery supermarket was and headed off in the opposite direction.  Thank goodness for radio contact and the convoy was brought to a stop a couple of kms down the road and reformed in order.  We then headed off towards the west along the Bacchus Marsh Road (C704) turning off the bitumen at Carrolls Lane where we aired down and then proceeded by way of Firth Road which for some of its length forms the boundary between The State Forest and the State Park.

The next challenge was to find “Wombat East No. 8 Track”.  The convoy overshot the turn taking the next turn which turned out to be a dead end.  Following this final course correction, a delightful day of navigating tracks, enjoying the company and scenery ensued. The trip traversed a good section of the forest using the Saltwater, Burnt Mill, Firth, Campaspe, Diggers, Upper Chadwick and O’Brien’s roads / tracks.

Having been warned in advance of deeply rutted and muddy tracks, it wasn’t too long before the convoy stopped to consider the first of such challenges.  While most elected to keep clean and dry, Colin was eager to get wet and muddy and was very quickly through this first obstacle with wheel spin and muddy water splashing about.

The next challenge was longer section of rutted track which again was successfully navigated by all using any one of a number of different route possibilities – all the time avoiding the trees! 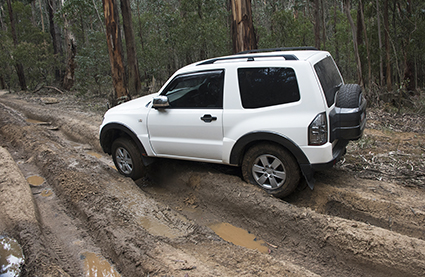 The convoy stopped at the very pleasant and recently renovated Firth Park picnic area for morning tea, social engagement and to make use of the toilet facilities.  Many thanks to all who brought biscuits or cake to share!

The main excitement of the day was next on the agenda with a very deeply rutted section while driving along Diggers Track on the way to O’Briens Crossing / camp ground.  Judging from the discarded muddy wooden pole and jacking block, as well as the rope cuts in the nearby trees as evidence of previous bother, this was going to be a challenge to all – especially since the track condition had changed since the reconnaissance trip a week earlier.

Examination showed that there were three possible paths through this section of track: 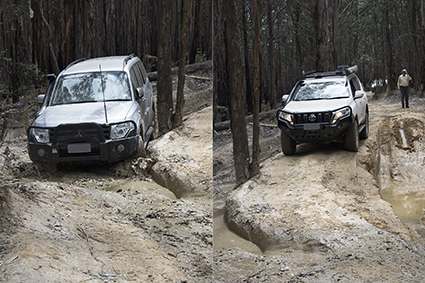 Attempting the centre and right options

Bill and Gill were first through without incident – Gill driving while Bill gave directions over the UHF radio.

The next was Colin who decided to take the left narrow cut track with ruts and water.  Apparently during the recce this route was passable, but today it wasn’t and Colin got stuck on his rear diff with one front wheel and one rear wheel freely spinning when he applied power!  Daniel came to the rescue in his short wheelbase Pajero to tow him out.  The tow wasn’t successful and the retrieval operation was changed to a snatch (with everyone putting a lot of distance and trees between them and the snatch strap) which worked like a charm to get Colin’s 4WD out.  Well done Daniel! 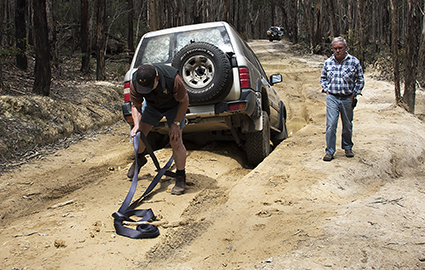 Colin prepares for extraction from the left option

The exit diff skid mark provides a study of the summation of vector forces.  Going in, some of Colin’s 4WD weight is transferred to the front axle decreasing the rear axle / diff load and therefore clearance as the tyres will stand taller which allowed him to get quite far.  But the tow / snatch operation has the result of pulling the vehicle out but also into the ground compressing the rear tyres which resulted in a much greater effort / force required than entry and hence the lengthy skid mark. 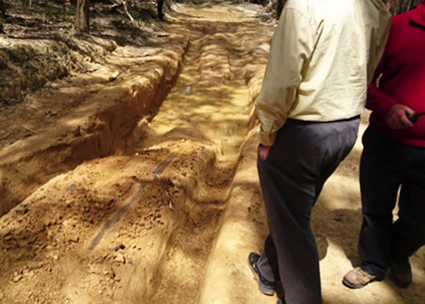 Most of the remainder of the drivers chose the guided centre route, while at least two took the right hand route which, from an onlooker’s point of view, looked like a bit of a wild ride.

There is also a valuable lesson to be learned here regarding anyone guiding a driver from a suitable vantage point – especially as the guide has to use one hand to hold the radio.  Verbal directions can be easily confused so it is probably wise to use strong and unambiguous hand signals as to the direction the vehicle is to be steered.

We continued along Digger’s Track until we arrived at another very wet and suspect passage.  Fortunately our leader decided to take a narrow side route through the trees. We all breathed in and pulled in our side mirrors to follow him through without incident. This was followed by some slow going down a steep and rather rocky section but we all made it unscathed.

Lunch was soon upon us for a stop at the Upper Chadwick camp ground which had also been recently renovated. The tables and facilities were all in good order. 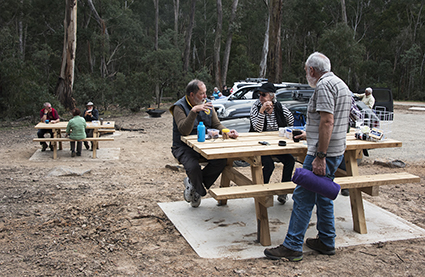 One highlight of the trip through the forest was the flowers – though only confined to some sections (possibly the shady slopes).  The colours are quite vibrant as can be seen in this photograph. 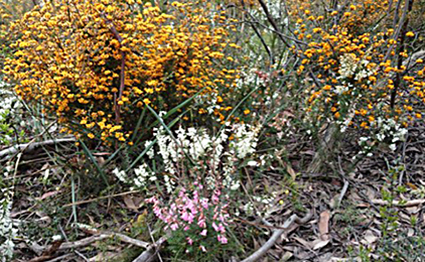 We continued along O’Brien’s Road until we came to O’Brien’s Crossing Camp Ground for our final stop and a possible swim for those keen swimmers amongst the group.  Unfortunately the Lerderderg River was quite low and the air temperature somewhat cool so no swimming took place.

The final section of the trip was the continuation of O’Brien’s Road until the junction with the Greendale-Trentham Road (C318).

We stopped a short distance from the junction to air up before hitting the bitumen. The Western Highway (M8) was a short drive to the south from where were made our way home.

Many thanks to the leaders and all whom attended for making the day so enjoyable.

Text: Mark with input from Ruthi