Cooloola Coast and Fraser Island - May 2018

Participants: Heather and Colin, Phil and Gill, Ray and Maz, Mark and Felicity, Tony and Graham

On 5th May a group of 7 vehicles gathered in Tewantin to explore the Cooloola / Fraser region in the Great Sandy National Park. The trip was planned to be a relaxed one and to explore every nook and cranny of the area from 4 campsites.

We started with a day trip to Harry’s hut and some of the Inland lakes on the Noosa River. The trip started properly the next day. Our trip had coincided with a Queensland holiday so the beach was busy but we were able to find a beach camping spot on Teewah beach. 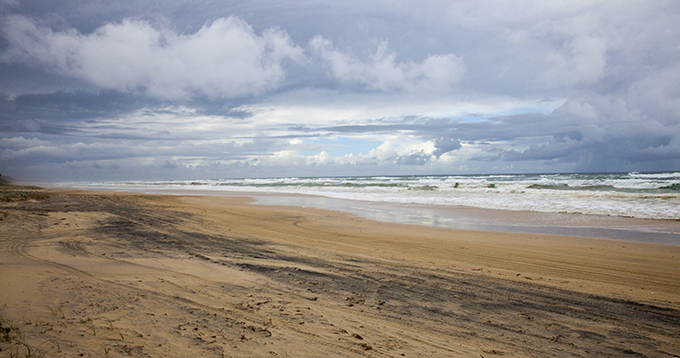 The brewing storm at Teewah Beach

The plan for the day had to be abandoned due to adverse weather. However we explored the Freshwater camp site and the first glimpse of the incredible coloured sands of Rainbow beach. Our trip was bookended by character building amounts of rain, 46 mm our first night and 36 mm our last night. However the weather in between was perfect, glorious Queensland weather with blue skies and warm sunny days. After that first night the clouds parted and we were free to climb the Double Island Point, first named by Captain Cook, to the lighthouse. The steep walk up was worthwhile for the amazing views from the top. 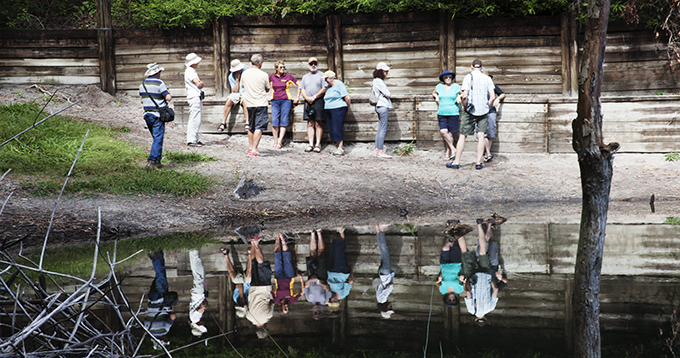 Reflecting on the state of things at Freshwater Lake

We then proceeded to Rainbow Beach via the inland track. There had been much debate and speculation about tackling the Mudlo rocks, but caution and safety prevailed and the safer and very pretty route through the glades was taken.

After a quick stop to refuel in Rainbow Beach we headed for the ferry at Inskip Point. So the real adventure began. 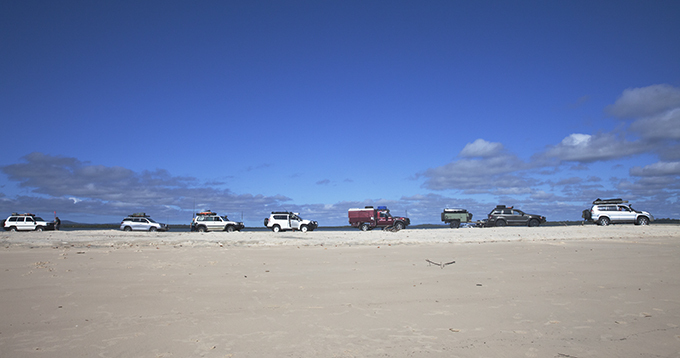 Waiting for the barge at Inskip Point

We took advantage of a favourable tide and drove all the way up the eastern beach to Waddy Point. A couple of the rocky outcrops required taking the bypasses but all were easy to negotiate as the heavy rain had dampened the sand. We set up camp in the sheltered top camp at Waddy Point. It was an easy walk to the beach and a great place to explore the northern area of Fraser. The first day took in the Indian Head area, and after a climb we were treated to a panoramic view of the area. In the clear waters we spied manta rays, small sharks and a dolphin. 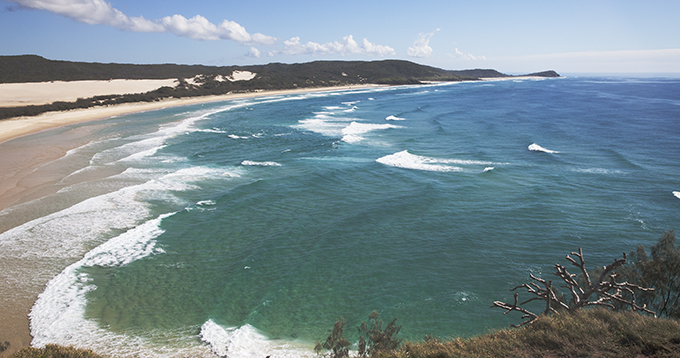 The view from Indian Head

Next stop was a fun session in the sparkling pools of Champagne rocks. A short board walk and a bit of rock hopping lands you in these amazing rock pools. They are replenished by fresh, foaming water crashing over the seaward rocks. The warm, bubbling water was irresistible and a highlight for many of us. Then we returned to the Waddy Point beach for a picnic lunch and several explored the rocks. Others ventured into the township to see what it had to offer.

The next day we left the camp for the Sandy Cape, the most northerly point of the island. Interesting birds were seen, including a white breasted sea eagle. We had been warned of negotiating the Ngkala rocks. These were all negotiated really well by the group, firstly taking a by pass at the South Ngkala, this  included a narrowing water gully and sandy areas, but arriving at a North Ngkala Rocks was a bit more tricky. The by pass was blocked by a car bogged in deep sand. So we attempted and succeeded in crossing the rocky outcrop. It needed some very precise driving at incredibly slow speed but those directing the drivers gave excellent advice. The rest of the drive was smooth and pleasurable with splendid views of aqua seas and huge sand dunes. There was a steep walk up to the lighthouse but with wonderful views and an interesting fact board including a number of stories of wrecks off the area and lives of the early inhabitants of the lighthouse. 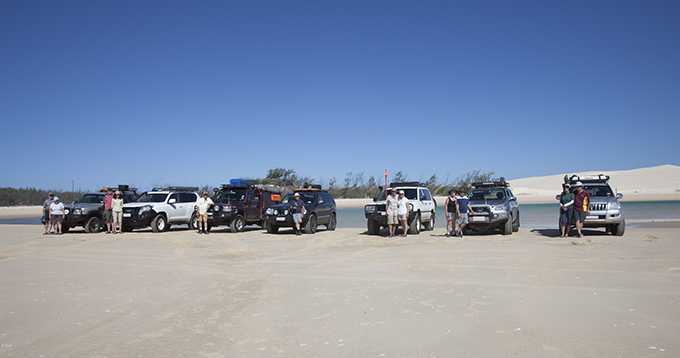 On the return trip we again negotiated the difficult areas with ease and stopped at Ocean Lake. 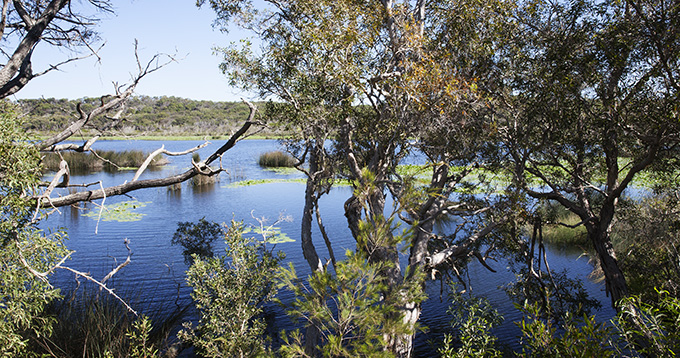 The group were free to explore different parts of the area in the afternoon.

Our last full day of exploring this northern area was to go over to the western side. We started by driving along the beach beside the lagoons. A Jabiru delighted us being very easy to spot. We then turned onto Wathumba Creek Track. This track took in an interesting forest drive of eucalyptus, banksia, palms, casuarinas, grass trees and ferns. One pool was so clear the reflections looked like part of the forest floor. Once out onto the Hervey Bay side, we left the cars and explored the inlet on foot. We needed to clamber over fallen trees but the result was the most pristine bay to spy for another day to explore. As the tide went out hundreds of Soldier crabs were scuttling about which were amusing to watch. 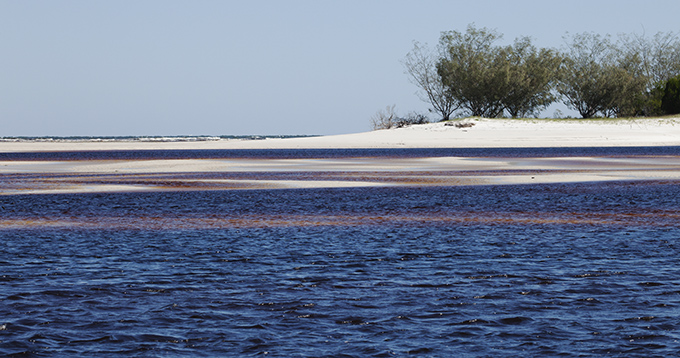 Mother’s Day started with an excitement in the air. A move to our next camp and range of interesting places to explore. Our camp was to be close the Maheno wreck on the beach strip nestled in the dunes. It was great to see the wreck in different tides and different light. Looking quite eerie at times. 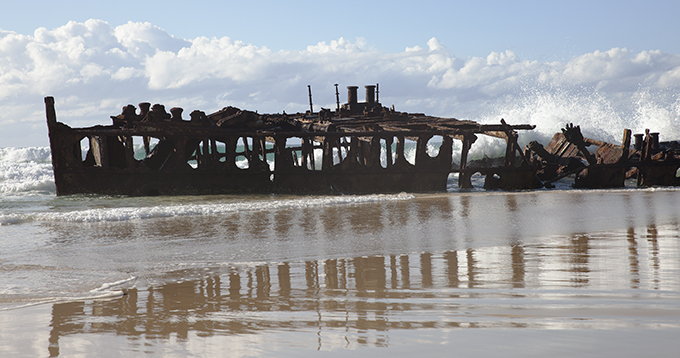 We visited the red Canyon together and then people were free to explore the wreck, the Pinnacles, Eli Creek. Some even tried the delicacies of the Happy Valley Bistro. Some members of the group took the 15 min flight over the island. It was fascinating to see parts we had driven over from a different viewpoint and many other lakes that we would be unable to get to. We even had a close look at out tents from the air. 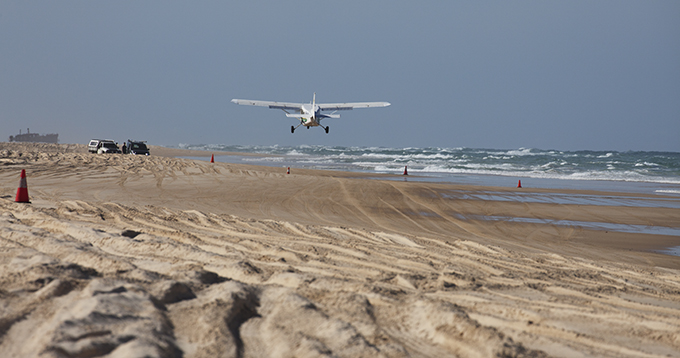 Taking to the air at Eli Creek

After a fabulous sunrise from our fabulous seaside camping spot, we headed to the Northern circuit route. We visited the Knifeblade Sandblow and took a short walk to the perched Lake Allom with its many  inquisitive turtles breaking the surface of the calm water. We then drove through remarkable forests with incredible tall trees and broke out to the western beach which had a real wow factor. Pristine white sands as far as you can see. The tide was in our favour so we drove up and down as far as we were able within the limits of the creeks. We hardly saw any other vehicles or people. An added bonus was a juvenile Minke whale entertaining us a short distance from the shore. This proved to be the favourite destination for most of the group. 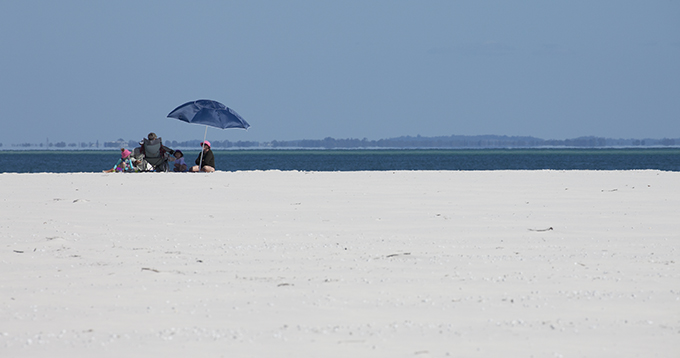 Eventually we dragged ourselves away from this idyllic spot to continue around the Northern Track, passed the Boomerang lakes and most beautiful forests. The wind became quite strong during the night so not a very restful night but still a great spot.

The next morning we had to delay our departure as it was the highest tide and the waves were crashing right up to the campsite edge. We then set off along the Lake Garawongera track to our last campsite at the historic and sheltered Central Station camp ground, a beautifully arranged ground with  spacious spots amongst  towering trees. Having set up camp we set off to see the Kingfisher Bay resort, interesting but very happy to get back to our homely tents. We had an incredibly quiet night (no crashing waves, no wind) only woken by noisy kookaburras. We then drove to have one last look at the western side, which was to Ungowa. This area is quite different and very close to the mainland and covered in Mangroves. There was a disused jetty in bad repair. Lake McKenzie was our next stop and a refreshing swim undertaken by some. We had managed to arrive before most of the crowds and then visited the lookout for Lake Wabby, the deepest of the freshwater lakes and one of only 2 barrage lakes on Fraser and in the World. The lookout has a great view of the lake and the Hammerstone Sandblow. We then spent quite a bit of time at the Central Station historic area. There were fascinating boards with the history of the indigenous people, timber and sand mining industries, life on the Island for early settlers and marvelling at the Wanggoolba Creek, so clear you can hardly see there is water in the creek. 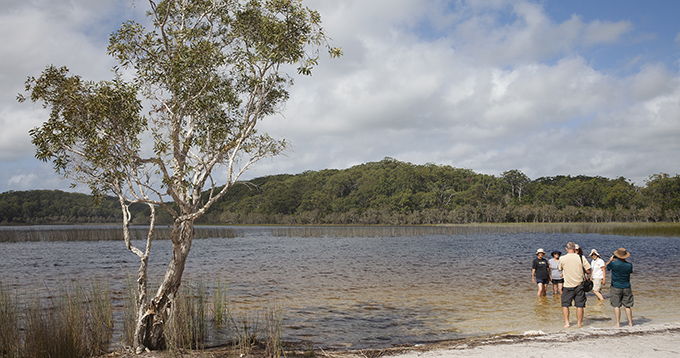 A paddle in the inviting, but chilly waters of Lake Garawongera

This was the last night on the island and we had experienced another night of consistent rain. We had planned to visit and swim in more lakes on the Southern Circuit on our way to the ferry but the weather put a stop to that idea. However we had a unique event to witness, which made up for that - a freshwater turtle laying her eggs in the middle of the sand track. It was an incredible experience to watch. After watching for 30 mins we tried to make a safe space for her and arranged sticks around her.

Fraser Island had been a wonderful experience. Together we had travelled the highways and byways and seen the Island’s beauty in all her glory.  Our experience paid off and we had no difficulties but we did need to help someone else driving too close to high tide. We saw about 10 dingoes, mostly on the beaches, who looked healthy but were not disturbed by people. Our one fisherman had a story to tell but no dinner. Thank you to the wonderful group we were able to share this unique experience with.