The Murrindindi Project is an ongoing arrangement whereby members of FWDV affiliated clubs volunteer their labours to assist DELWP and Parks Victoria Rangers to carry out various track and campground maintenance duties in the general Murrindindi Shire area.

This weekend’s working bee involved unlocking many seasonally closed tracks, driving them to carry out whatever clearing was necessary to ensure access for fire and management vehicles and 4wd trippers over the summer season, and reporting any major damage, blockages or other concerns. We covered tracks in the Lake Eildon NP, Yarra Ranges NP, Cathedral Range SP and extending into the Rubicon State Forest.

Area #1 at Jerusalem Creek campground was reserved for us, and several volunteers took the opportunity of free camping on Friday and/or Saturday evening, while others made it a day trip on either Saturday or Sunday. 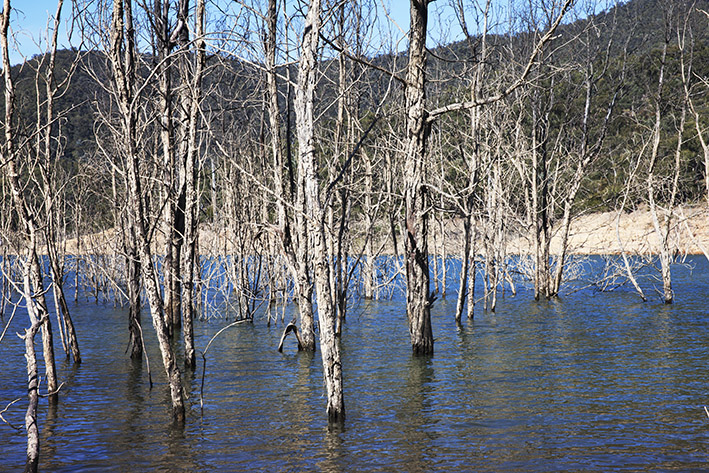 The weather was perfect and the area has received almost no recent rain so the tracks were dry and dusty! There was plenty of new growth overhanging the tracks and many fallen small trees that needed clearing, so the tranquility was regularly drowned out by the frequent buzzing of chainsaws. The volunteer group fortuitously included a couple of experienced arborists so they were able to be dispatched to tracks known to need clearing of more substantial trees. Other teams successfully managed to clear and open their delegated tracks, though all reported that in every case except one, the gates had been broken open and damaged, or locks removed.

The Offpeak team was allocated Tweed Spur Road commencing in the Cathedral State Park. The State Park section was easy going, but once we moved into the State Forest section the amount of clearing required increased considerably and progress slowed accordingly. By late on Saturday afternoon it was obvious we weren’t going to complete the task that day, so we retraced our steps and locked the gate behind us. (This was the only still-intact gate that anyone came across.)

On Sunday, we sent another team to continue from where we left off, while we proceeded to the other end of the track, the intention being to meet up in the middle somewhere. “The best laid plans…” By early afternoon we encountered a large tree fallen across the track. It was probably 30 metres long and over 60 cm in diameter where it crossed the track - way too big and heavy for us to deal with. We managed to make radio contact with the team coming in from the other end, let them know our predicament, and had to call it a day. 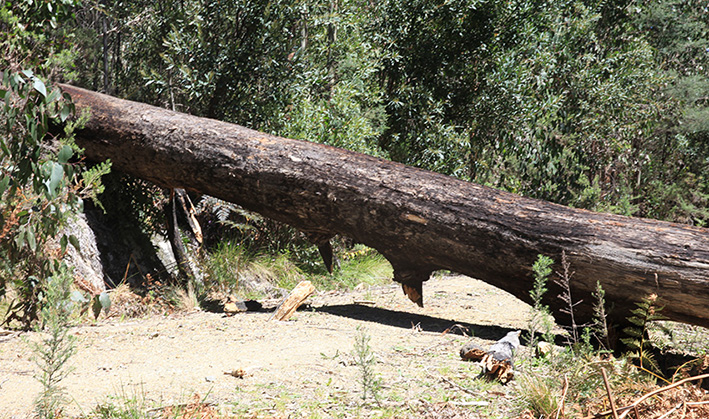 The end of the line!

All in all however, it was a successful and productive weekend, and the Rangers expressed their gratitude for useful work completed that they would otherwise have struggled to get done. Although the track we were allocated was “easy” in standard - other teams scored some more challenging 4wd tracks - we still got plenty of healthy exercise and had lots of fun. It is satisfying to know that such efforts contribute to ensuring our continued access to the 4wd tracks of Victoria’s forests.